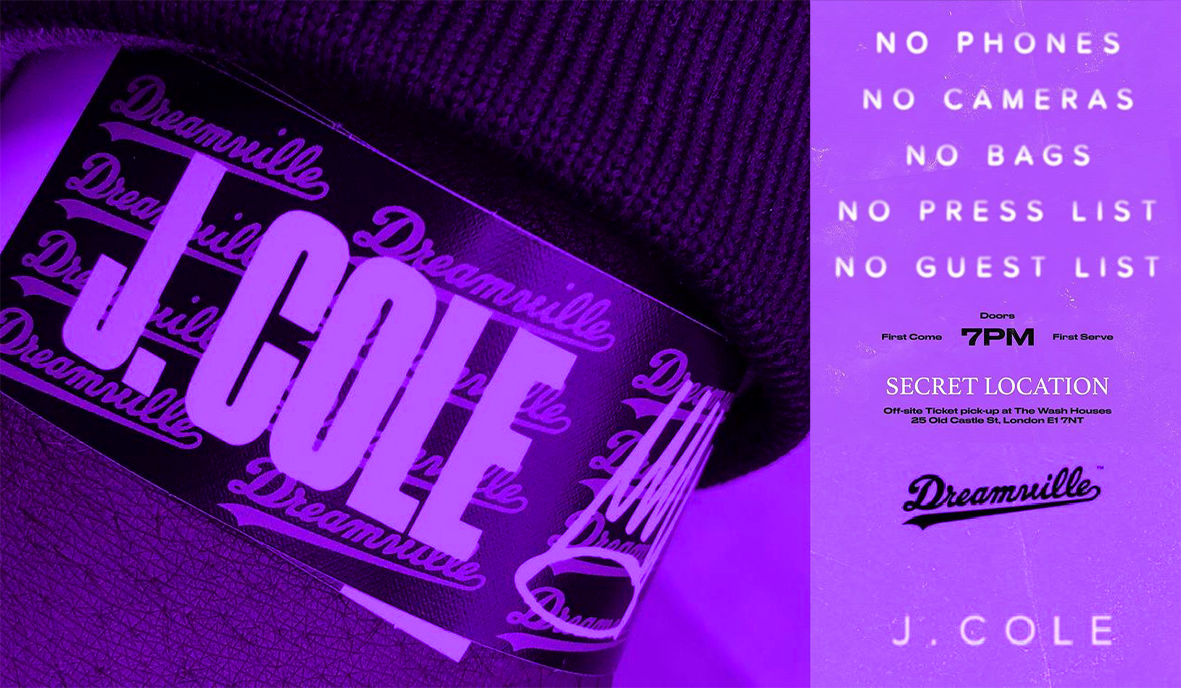 On Monday, 16th April J. Cole wiped his inactive Instagram clean and changed both Twitter and IG profile pictures to an electric purple, with a tweet saying “It’s Time” followed by a poster for a New York show detailing No Phones, No Cameras, No Bags, No Press List and No Guest List. The only way of entering this exclusive event was to get to the Ticket pick-up location as soon as possible. I could only hope that this meant new music from one of my favourite artists was on the horizon. It’s been a good few years now that the Dreamville CEO has taken a step back from social media, only popping up rarely, mostly for him and his label signees music releases. However a few hours later he tweeted that his new album KOD would be released on 4/20.

The next day at 4:12pm (GMT), Cole made a tweet with details for a London show. With his tweets on notification, I drove straight to the ticket pickup location to find a long queue which by the time I parked had gotten longer... After the suspense of waiting in line and successfully acquiring a ticket, I was told the venue location was Village Underground in Shoreditch, East London (over 18’s only must show ID). The venue is small and intimate, perfect for a vibe.

Cole came on stage and explained that he wasn’t going to do these album 'listenings' but decided to show love to the fans. He stated that by the end of the night we would be within the 1300 people in the world to have heard his new album KOD. The album title came to him during the making of one of his songs but funnily enough, the acronym came first. Cole said that no more than 5 seconds after the acronym, the names Kidz On Drugz, King Overdose and Kill Our Demonz popped into his head, in that order. He then went through the meaning of each title.

Kidz On Drugz: Referring to the vast wave of drug-indulgent rappers and kids who follow these trends

King Overdose: Knowing the negative effects but enjoying the addictions

Kill Our Demonz: This is the stage that Cole said we should all be striving to get to. A place where we can kill our addictions and coping mechanisms to deal with pain and trauma head-on

Cole said he caught a musical wave, making basically a song a day and completed the first edition of KOD in 13 days which happened to be a day before the European leg of the 4 Your Eyez Only Tour. He said he wanted to release the album as soon as possible when he finished touring in November because he felt the message was urgent. However, he wanted a make sure the album was up to his standards and in his words a Classic.

KOD addresses addiction and the fact that everyone endures pain in their lives. These addictions could vary from sex, shopping, drugs, love (which one song said is the strongest) etc but in a nutshell, this album is a collection of trap-influenced beats which Cole lyrically spazzes, which takes a different direction than any of his projects thus far. The lyrical content is riddled with bars and touches on addiction, drugs, the kids of today, the ups and the downs as well as a conscious focus on societal issues.

KOD is 12 tracks long, with the last song titled 1985 (Cole’s birth year and the intro to an upcoming project called The Fall Off), which comes after the album’s Outro. The song addresses or should I say schools Lil Pump who once tweeted “FUCK J. COLE & FUCK THAT LYRICAL SHIT”. I’m quite sure he didn’t say Lil Pump’s name but by the lyrics, you could tell the shoe fits. He addresses Pump from the position of a wiser rapper who’s been in the game, not hating at all. Cole rapped saying that he understands that rap has changed and the feeling to flex whilst stating that the content of the music that these rappers make is fast-food and temporary. The fans who like you for it won’t be your fans in 2 to 5 to 10 years because you would have just been a phase. Those Gucci Gang fans would have grown up and now the money which felt like it would last forever after signing a multimillion-dollar record deal and being popping dries up after the years go by. Where are the loyal fans who’ll support you and come to your shows years later?

Overall these 2 album listenings and the very short album rollout which he started two albums ago with 2014 Forest Hills Drive is a great marketing move, but an even better sentiment to fans who didn't have to pay a penny, especially after stopping his Dollar And A Dream tours for £1 or $1.